The Dog is the secondary playable character of Secret of Evermore. A normal dog owned by the Hero living in Podunk, he accompanies his owner to Evermore, where he takes on a variety of different forms.

The dog's normal breed is unspecified but maybe some sort of terrier. As the player moves through the regions of Evermore, the dog's breed changes. In Prehistoria it is a large, wolf-like beast; in Antiqua it is a sleek greyhound; in Gothica it becomes a pink poodle; and in Omnitopia it becomes a robotic dog styled after a toaster. It is not specified why the dog's form changes, and the boy usually takes it in stride, just saying "he hasn't been himself lately" when introducing his dog to others.

The dog is the hero's faithful companion through Evermore, never abandoning him and fighting along his side. However, the dog tends to misbehave often, getting the hero into trouble with its antics. The dog has a particular hatred of cats: it was a cat that provoked the dog into finding the machine into Evermore in the first place. As a running joke in the game, often when the hero is engaged in prolonged conversation with an NPC, a cat will run by and the dog will give chase, then return to the hero's side after presumably losing track of the cat off-screen. Even at the ending of the game, the dog lingers before approaching the machine to return to Podunk, looking for a cat it had chased earlier.

In the year 1995, the dog accompanied the hero to a movie in Podunk. On leaving the cinema, it chased a cat down the street and ran into Professor Ruffleberg's Mansion. The boy pursued his dog and found Ruffleberg's secret lab. Here the dog chewed on some of the wires powering the machine, causing it to activate and send the two of them into Evermore. In Evermore the dog was sent into an escape pod, and the two crashed on Prehistoria when the pod malfunctioned. When the dog found the boy, transformed into its new form, the boy questioned if this beast was really his dog, and threw a stick for it to fetch to test it. The dog instead retrieved an old bone, but it was good enough for the boy, and the two set out on their adventure.

When the Volcano erupted, the boy and the dog were separated, and the dog ended up in Nobilia. In its new greyhound form, it resembled the city's sacred dog statue and was hailed as a god. The boy arrived in town just as a meeting was held to announce the arrival of the "sacred dog" and a fight in Nobilia Colosseum was to be held in its honor. The dog returned to its owner, inadvertently selecting the hero to fight Vigor.

In Gothica, the dog was forced to wait outside while the hero attended an exhibition, and was taken by one of the exhibition hands and dressed up in a pig mask to serve as one of the shows, a "pig-dog." The dog broke out and fled down Ivor Tower Alley where a pig race was taking place. The dog handily won the race, earning the hero a dinner with Queen Bluegarden. The dog meanwhile was taken to Pierre to be cooked into the main course, but it fled the kitchen and crashed the banquet by leaping onto the table. The furious queen ordered both the hero and the dog imprisoned.

The dog automatically accompanies the hero as a secondary party member. The player can switch command between the two with the Select button. The dog attacks enemies by biting and clawing them, and like the hero's weapons, will gain aptitude as it levels up, letting it use charged attacks. The dog runs faster than the hero and can deal heavy damage with its attacks, but obviously has no ranged capabilities. In addition to combat support, by holding the L or R pad, the dog can be commanded to sniff for hidden alchemy ingredients nearby. The dog will also sometimes sniff out NPCs or items in pots.

The player is able to talk to NPCs while commanding the dog, and they will react differently to the dog than to the hero; some NPCs give the dog items they would not give if spoken to by the hero.

If the dog is KO'd, it cannot sprint, attack, or sniff for alchemy ingredients, but will continue to follow the hero.

The dog has a lot higher Stats and stat growth than the Hero, but can only wear 1 piece of armor and is unable to wield any weapons. The dog has only slightly lower Magic Defense than the hero.

The dog does not gain any experience if the player is only controlling the boy and the dog is gone. It happens multiple times that the dog is lost and that the boy has to continue alone. For more info, go here.

The dog's gameplay changes significantly while in Omnitopia. Its normal attack is replaced with a volley of laser shots from its eyes, and its charged attacks summon a laser cannon from its back to shoot large laser blasts at enemies. It can also sprint indefinitely, and has a chance to counter dodged attacks with a charged attack automatically. The dog is able to go into space, critical in the Main District where the player must take control of it and use it to destroy the Spherebots. It also gains 250 extra defense and 80 attack when in Toaster form.

When the player switches control to the Dog, the mechanics of casting Alchemy changes a bit. Whilst normally the maximum amount of offensive/dark alchemy the Hero could launch on a specific enemy is limited to 2-3 casts, when controlling the Dog that becomes up to 8 times. This is incredibly strong and makes almost all boss fights very easy, given that the player has sufficient ingredients for their casts.

This exploit is not only limited to offensive/dark alchemy however. It can also be used for defensive/light alchemy. This way the player can grant all needed Status buffs like Atlas, Aura, Energize, Pixie Dust etc. and/or healing required (Heal/Super Heal, etc.), in one combined casting animation. Do note that the Hero or Dog can never be under the effects of 5 or more Status buffs.

This exploit should be used in any playthrough or speedrun to maximize efficiency. Some players may find it unfair or a form of cheating and may choose not to abuse this exploit, however.

The dog, when not controlled by the player, will regularly and randomly begin sniffing, even if no ingredients are nearby. Although it is random and can sometimes be tedious to rely on, this allows for some unique interactions, skips and exploits. There are many instances in the game where this exploit can be used/abused. Here is a list (more information can be found on their respective pages) of minor and major ones in chronological order:

With most of these exploits, the knockback of the Bazooka can also be used, proving to be a lot more reliable and easier to use. The biggest problem with this is that the Bazooka is only acquired (and usable) late into the game, in Ebon Keep.

The Dog can be revived in multiple ways. A Dog Biscuit will put the dog at 100 HP. The Revive formula will do the same but at (0 + 50 × Level) HP. Using Time Warp will also revive the dog. Using forced heals such as buying a fish from the fishmonger at Nobilia Marketplace or heals received after a boss fight (Mammoth Graveyard) will also work. Healing at an Inn works as well. An oasis in the Desert of Doom will also revive and fully restore all HP.

The dog has varying movespeed values, depending on which form the dog is (which region) and wether or not the dog is running. Each form also has extra benefits. For more info about the Jaguar Ring and how running works, visit the page dedicated to it.

The following table displays the time it takes for the dog to walk or run 1 screen distance horizontally (from left to right).

This table points out a few things:

The Dog's normal form in Podunk

The Dog's form in Prehistoria

The Dog's form in Antiqua

The Dog's form in Gothica

The Dog's form in Omnitopia 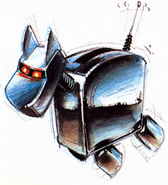 CG art of Omnitopia form
Add a photo to this gallery

Retrieved from "https://secretofevermore.fandom.com/wiki/Dog?oldid=10847"
Community content is available under CC-BY-SA unless otherwise noted.